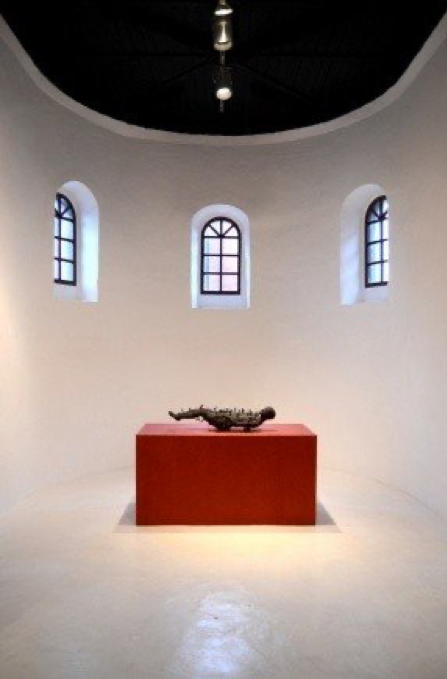 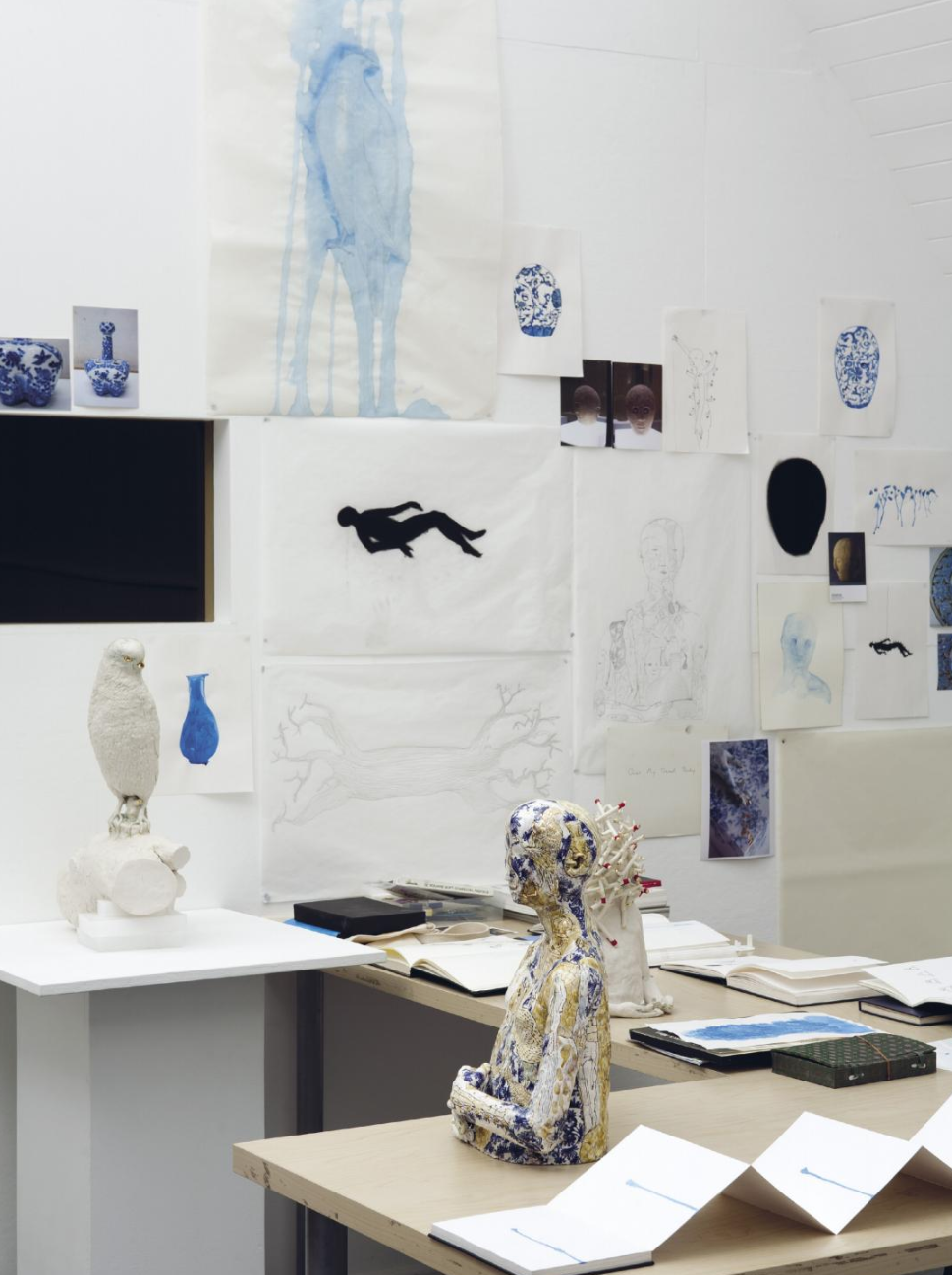 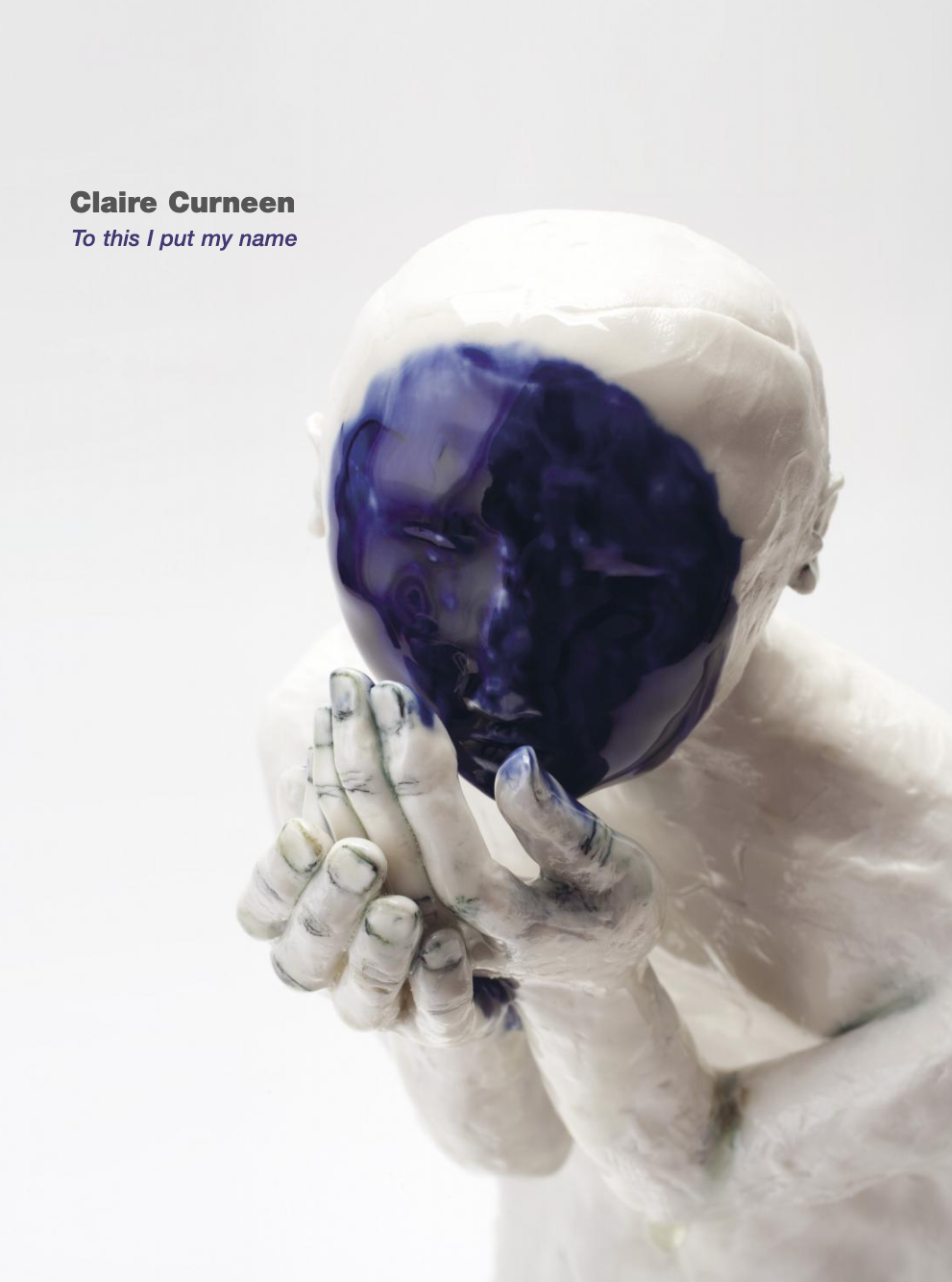 To This I Put My Name – Mission Gallery

The vaulted space of Mission Gallery is a potent setting for Claire Curneen’s latest body of work, an exquisitely modelled cast of ceramic figures whose silent yet imposing presences offer poignant reflections on the nature of humanity and our precarious place within it.

Developed over two years, this exhibition is the culmination of an Arts Council of Wales Ambassador Award project, also supported by Mission Gallery and Ruthin Craft Centre, where it will subsequently open in March. Initially, Curneen worked in response to the collections of The National Museum of Ireland, Dublin, where the production values, materiality and narratives of her selected artefacts provided rich inspiration. Whilst artist-in-residence at Mission Gallery, drawing played an important role in the development of this research; Curneen’s studio wall offers a cluster of tender resonances and relationships between watery-linear or velvety-dense drawings and the photographs of museum objects. Information was filtered and re-formed, ideas emerging as evocative human equivalents.  Drawing is a conduit for this artist, the transition between fluid thought and physical expression.

The title of the exhibition, To This I Put My Name, is quietly assured: it is a statement of authorship and acceptance, reflecting the composed maturity of this new body of work and perhaps also Curneen’s more firmly rooted own position. The ethereal qualities of earlier pieces remain, as do the references to religious and mythological narratives that underscore her practice, but here a counterpoint is added. Porcelain meets black stoneware; a subtle shift occurs, a delicate tension achieved.  With the use of black clay comes solidity: unlike their fragile porcelain counterparts, these figures are more grounded, more of the world. Their gritty materiality suggests an earthy correlation, the hand-pressed sections of clay reminiscent of cracked, dried mud. Dualities occur in the gathering of Curneen’s otherworldly, porcelain bodies amongst these new, dense and present characters, and through their polar positions, we find ourselves somewhere in-between: instability and vulnerability are revealed, but so too are the all possibilities of being.

While individual narratives arise, ‘the in-between’ is an underlying theme that that seems to permeate Curneen’s new body of work. Many of the pieces are undergoing subtle shifts of state or caught in spatial transition. A sense of flux is present. Occupying the apse, an imposing figure, Portent, lies suspended; reclining or rising, this is a body of extreme tension. A haughty falcon sits aloft, surveying the vicinity, poised for flight; ground and sky connect through this avian motif. Other bodies, masked, wounded, hirsute or sprouting arboreal growth also seem engaged in transformation. Pruned nodes cover many of their frames, suggestive of loss yet also renewal.  Images of growth continue in the use of decorative blue transfers: a nod to ceramic heritage, they are knowingly applied, their instability under heat causing slippage, signalling uncertainty and change. St.Sebastian’s floral patterns delicately bleed and blur as they slip from his body to pool at his feet.

We understand these ceramic figures as human; their very presence embodies a persuasive and poignant authenticity, yet through materiality and scale Curneen reminds us of their objectness and of the ceramic tradition from which they originate. Rough and smooth, decorative and unadorned, intricate and raw all jostle together within these pieces. In their uncanny embodiment, these clay figures assert themselves within the space.

It is the evocative venue of Mission Gallery that provided a physical focus for Curneen’s project; orchestrated relationships exist between space, sculpture and viewer. The diptych Builders creates an axis for dialogue between these elements; the outstretched hand both warns and beckons, we are seduced into the frame. Conceived as one piece, they are a couple, male and female.  Their presence is not only pivotal within the group of artworks, but also within the gallery setting. They watch and witness; they guide; they direct. Many of Curneen’s figures tend towards gestures of intimacy, small and self-reflexive. These earthen bodies however, reach out and connect. There is a motionless quality to the space, but it is not inert inactivity; the stillness of these figures generates friction. What becomes clear is that their power multiplies when grouped. Curneen is choreographing a suspended moment, a space in-between upon which we feel we have stumbled.  A space that is disrupted by the powerful yet silent conversations that reverberate amongst these figures and that will pull us into their undertow.

This website uses cookies to improve your experience while you navigate through the website. Out of these, the cookies that are categorized as necessary are stored on your browser as they are essential for the working of basic functionalities of the website. We also use third-party cookies that help us analyze and understand how you use this website. These cookies will be stored in your browser only with your consent. You also have the option to opt-out of these cookies. But opting out of some of these cookies may affect your browsing experience.
Necessary Always Enabled

Any cookies that may not be particularly necessary for the website to function and is used specifically to collect user personal data via analytics, ads, other embedded contents are termed as non-necessary cookies. It is mandatory to procure user consent prior to running these cookies on your website.